Covid-19 has hit the drycleaning industry hard globally. Frank Ziermann of Bowe recently had a ‘no holds barred’ interview with the German textile care association’s WRP magazine on the occasion of Böwe’s 75th anniversary

Frank Ziermann, managing director of Böwe, was recently interviewed for the German Textile Services Association’s WRP magazine to mark the occasion of Böwe’s 75th anniversary. Pulling no punches, Ziermann commented that the current situation for the nation’s drycleaners was dire in the extreme “still fatal” and that he could not see any improvement until at least the middle of next year. It is a situation very similar to that in the UK and in many other countries aroud the world.

Ziermann explains that many drycleaners have seen sales slump more than 50% and are only just making ends meet. “Owners must have private assets to put in their companies to survive. Many companies are experiencing a lack of customer demand and are only opening one or two days a week, the staff having been put on short-time work and new business has almost completely come to a standstill.”

Because of restrictions aimed to slow the spread of Covid-19 there are no big events like conferences, fairs, concerts, theatre and so on. Birthday parties, weddings, parties, funerals and business travel are only happening in a limited way so the garments usually worn to these occasions are staying in the wardrobe and finding their way to the drycleaner, he reports.

“For people working from their homes, sweatpants and sweaters are enough. When people get back to work again on a large scale, then the drycleaning sector will pick up speed again. But I fear that the companies that employ them will still maybe hold out [moving them back into offices] until the middle of next year.”

Ziermann shares even more gloomy thoughts for the industry, saying: “Even before the current crisis, the textile cleaning industry was negatively affected and that is something that has been going on for some years due to changed wearing habits. The culprits here being casual clothing and the other main factor the domestic washing machine.” He believes the menace of the domestic washing machine is exacerbating the decline of the drycleaning industry.

“There are fewer drycleaning companies areound and thus a professional service is no longer guaranteed. This development also lowers the level of education and amount of qualifications in the shops which in turn leads to more customer complaints, because the technical competence in processing is missing.

“At the same time, textiles are lower quality and also more complicated to deal with. So, a customer who has a negative experience with a cleaner is not necessarily motivated to repeat the experience with a return visit. That customer is more likely to buy textiles that can be processed in his or her own washing machine. So don’t be surprised if customers use the drycleaners less and less in the future,” says Ziermann.

“When this crisis is over, then this market will be different to waht it was before the corona virus. There will be a tough autumn because the Insolvency Protection Act will come into play when any company that is over-indebted must file for bankruptcy. Many establishments are going this way, including in our industry. Before the pandemic these companies had earned little, and therefore had no, or hardly any, cash reserves.”

Zierman predicts that in the next few years up to 15%of drycleaners will have to give up in Germany. “Another blow to the industry would be if the right to work from home asserts itself, as has been recently discussed. Such a right to work from home would produce massive quantities of losses to drycleaners. It is already foreseeable that in the future there will be fewer conferences, trade fairs and business trips which will have a further impact on the industry.”

So far Ziermann has painted a very dark portrait of the future but there is light ahead, he believes, if drycleaners project a more positive image of their craft.

“Basically, drycleaners have to appear more self-confident in the market and present themselves as textile care specialists.It must be conveyed clearly to the customer that their care in utilising the right solvent offers advantages. The right messages must now be put to the public.” These are, he says:

So, says Ziermann, there are already good, ready-made solutions to make a company more successful. He explains, for example, standards for hygiene similar to those in laundries have been common for many years and with corresponding certification this can be documented and communicated to the customer. “Wellfounded foundations must now be created. It must be officially investigated and documented - maybe through the Robert Koch Institute - that the solvent in the cleaning process de-activates viruses, he says.

“Covid-19 is a very simple virus. If you can break up its lipid layer, that will kill the virus. A simple KWL, Perc or a modified alcohol can do this. But there are still today many unknowns with regard to the virucidal function of a solvent in textile cleaning. So now we have to do our homework.

“Five years ago the Böwe company was approached by representatives of the Chinese Government on disinfectant drycleaning. Asia was experiencing problems with bird flu, swine flu, SARS and MERS and were more concerned about the situation at that time than in Europe or the USA. We developed and implemented a concept that is very topical today.”

Ziermann explains the process: “Germs growing in a drycleaning machine are rinsed off the goods with the solvent, and are in the liquid where they are exposed to an extremely powerful UV source. This is where the genetic structure of the germs are destroyed, they can no longer reproduce and they die.

“There are also water separators in the machine, tanks and drum housings with a cataphoresic coating applied. These components are also regularly rinsed with ozone, so nothing can get stuck there. Finally, a fine biocide spray will get rid of any residual germs that are not removed by the solvent or the drying air.

“The result of this combined process is one germ reduction of 10 to the power of minus 6. That is so far unmatched in the industry. For comparison:

With the solvent alone it is possible to achieve a maximum germ reduction of 10 to the power of minus 2. A drycleaning machine such as this ensures a safe hygienic optimal result to a high hygiene standard throughout textile cleaning. To be able to realise this, everyone has to work across the company, relevant processes are changed accordingly.”

Taking the thought through to its logical conclusion, a clean and unclean side that is found in laundry clean rooms is the next step and Böwe has finished plans for a through-loading machine. However, as Ziermann points out: “Such a machine would but not only call for a higher investment in the purchase, but in operation it would also need a lot of space for a clean and soiled area.”

When asked by WRP to give his views on sustainability, Ziermann turns his attention back to his bugbear, the domestic washing machine, with particular reference to the generation of microplastics. pollution.

“The household washing machine is as I said before the biggest competitor to drycleaning. However, when washing synthetic fibres, microplastic particles dissolve from the fibres and are rinsed away with the washing water into the sewer system and into the environment. In a drycleaning machine these microplastic particles are caught in the in the distillation process and you can then safely dispose of them.

Ziermann says: “The topics of hygiene and microplastics, have been a public focus before Covid-19 came along. Unfortunately, textile cleaning has no advocates. Fewer than 25%of drycleaning businesses in Germany are in a trade association. That makes it even harder as an industry to speak with a common voice.” 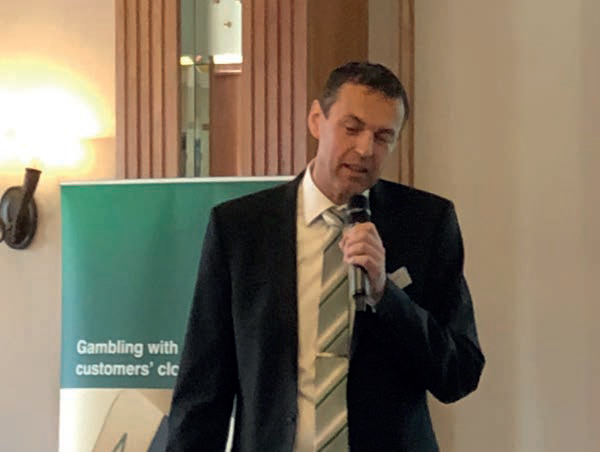