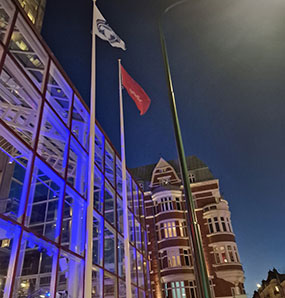 SWEDEN
Popular, festive, crowded are words that are often used to describe successful events, writes Daniel Karrholt of the Swedish Textile Services Association (Sveriges Tvätteriförbund). “Just being in the Ballroom at the Scandic Triangeln hotel in the centre of Malmö again was good, a favourite venue that always delivers.

“We were roughly 150 participants on site and the highlight of the day for many was the presentation by political legend of the Christian Democrats Alf Svensson ‘Interesting people I have met’. Svensson has had a long political career that began as youth chairman in 1970, party leader in 1973, member of parliament in 1985, government minister  in 1991 and member of the EU parliament in 2009. The speech ended with him playing the harmonica to the unrestrained cheers of the audience. “

‘Welcome to Malmö’ was the title of environmental director of Malmö Rebecka Persson's introduction, where we learned a lot about everything that is going on in the centre of the Öresund region. Various projects that the members and Tvätteriförbundet are involved in were updated by Anne-Charlotte Hanning, RISE:  Upstream. Her project is called ‘Upstream measures at an industrial laundry for mitigating microplastic release into the wastewater and impact at the waste water treatment plant’;  Julia Ronkainen and Roos Mulder, Wargön Innovation;  and The Loop Factory: Texchain3.

Rickard Gegö, CEO of the Swedish Association of Road Transport Companies gave an insight into its journey of change and future goals. Many smiled in recognition at the TV-programme ‘Swedish Truckers’, which has really put the Swedish trucking industry on the map. He also commented on the buzz at the event, the good atmosphere and the size of the meeting.

Communication professionals Anton Ewetz and Petter Edström from Explainer talked about how you can easily make information available yourself in a fast and brand-secure way via the Explainer Hello tool.

Christer Bäcker , Tvätteriförbundet´s energy expert and advisor to many in a rapidly changing world ended the morning session.

After lunch, Thomas Borg, sales and customer service manager, Sysav Industry, took over and talked about Siptex, which was established in Malmö, the world's first automated sorting facility for textiles. This linked directly to the autumn meeting in 2019 where IVL the Swedish Environmental Research Institute and Sysav presented the planned project. Now the plans have become reality and is now an important link in our industry's sustainability agenda.

When talking about the upcycling of textiles, the company Stormie Poodle is most often mentioned, which has partnerships with several Association members. This time delegates had the privilege of meeting the entrepreneur behind the company Caroline von Post, who also launched new business Beskow von Post.

An exhaustive summary of the economic  situation was given by the long-standing former member of parliament Allan Widman who wound up the presentations for the day. Meanwhile, all day the industry exhibition with 30 showcases was taking place and from 2.30 p.m. it was time to focus solely on the exhibition. Networking and discussions  continued until 6 pm and after that, close to 100 people gathered for the dinner, which, like the food earlier in the day, received top marks. The speaker gifts from Wendre were also much appreciated.