Injection of hope for 2021 but it is still going to be a long, hard slog 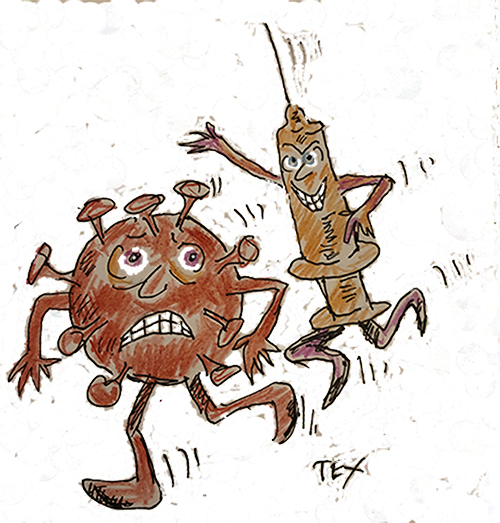 Well, there is more of a prospect of a happier new year as we head in to 2021 with two vaccines already being pumped into UK arms and others coming on stream around the world. Definitely that is a welcome harbinger of hope. However, it is not all good news as we are now back in full lockdown making it Groundhog Day for hospitality laundries in particular as well as many other textile care businesses.

We now have to contend not only with the third wave of Covid-19 infections, which resulted in the introduction of the Tier system late last year, the emergence of a faster-speading version of the virus, but also the knock-on effect of more positive cases still to come because of Christmas Day mingling. A record 60,916 new cases were reported on 5 January, alone and the shocking news that 1 in 50 of the population now has the virus.

On 4 January Prime Minister Boris Johnson put the nation into a new super-tough lockdown in an effort to contain the virus and to protect the NHS from overload. The figures above are a stark indicator of what the NHS is facing.

Hospitality laundries have already been especially badly affected and many drycleaner/wetcleaner businesses have seen their workload decimated, too. The Government needs to step in and ensure these businesses, owners and staff can survive into the new normal whenever that happens.

Chancellor Rishi Sunak has announced a one-off grant of up to £9,000 to help businesses survive the latest  lockdown.  Retail, hospitality and leisure sites will beeligible for the payments during lockdown, which looks likely to last at least six weeks from 6 January. A further £594m has also been made available for local authorities to support businesses not eligible for the grants. The entire package is will cost an estimated £4.6bn, the Treasury said.

But will hospitality laundries be in line for any of this largesse? Some were successful in convincing local authorities they were eligible previously when discretionary grants were offered in the previous national lockdown, many more weren't. it seemed to be very much a 'postcode lottery' depending on how different areas arbitrarily decided where laundry businesses fit – and there is nothing to indicate anything has changed.

The UK’s hospitality laundries, pre-Christmas, begged politicians not to forget just how desperate is the industry’s plight . A Christmas card, organised by the Textiles Services Association (TSA) showed a bare Christmas tree and the words ‘A Not So Happy Christmas’ and was is signed by some of the biggest names in the laundry industry, and was backed by UK Hospitality. It also included quotes from representatives of hospitality’s top brands, including Hilton Hotels and Radisson Blu.

David Stevens, CEO of the TSA said then: “What we need now is Government action.  We have hundreds of businesses that are desperate for financial aid – so far they’ve had virtually nothing and they face ruin.  We have 24,000 workers at risk of being unemployed.  We have a hospitality industry that relies on us – and won’t be able to function if we go under.” The situation now if anything, is worse in the face of a six week national lockdown.

The health sector also relies on the UK laundry industry as a spokesperson for Royal Devon & Exeter NHS Trust wrote: “Without laundry, an acute trust wouldn’t last more than a day.”

“We’ve been lobbying for help since March,” said Stevens.  “I just hope the weight of the whole industry talking as one, and the influence of the season of goodwill, will give the necessary push to the Government, so we finally get some support.”