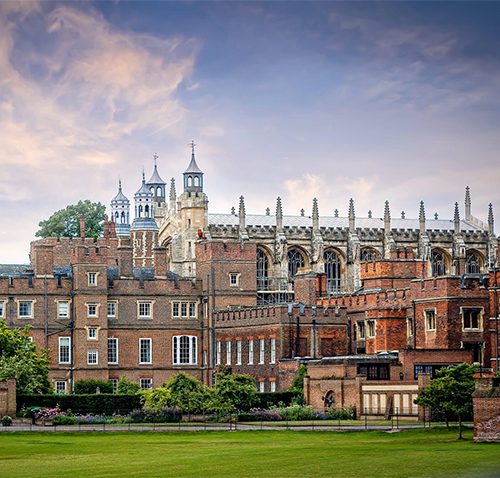 Eton College, the prestigious boarding school in Berkshire, has been educating for the future for over 600 years. Founded in 1440, by Henry VI as "Kynge's College of Our Ladye of Eton besyde Windesore" as a sister institution to King's College, Cambridge, the College has 1300 students, and embraces innovation in its pursuit of excellence and the provision of a well-rounded education just as much now as it did when it was founded.

That forward-looking attitude etends beyond the classroom to facilities management. In 2017 the college cut its energy costs by replacing enenrg guzzling lamps and fixtures that led to a reduction in its carbon footprint by 61%.  Earlier this year the College tackled the issue of water saving with the installation of a new storage and filtering system, Lint X.

Christeyns installs innovative water and energy saving equipment in commercial and on-premise laundries across the UK and Ireland that complements the use of its patented Cool Chemistry and other detergent programmes.

Eton College has had a laundry on site since 1881 and has been using Christeyns’ chemistry for almost a decade.  A dedicated team of 30 runs and maintains the laundry that processes 50,000 items per week including everything from rugby kit to chef’s outfits.  Items are sorted, washed, ironed and then individually repacked for each boy.

“As a whole, both the school and the pupils are focused on improving our environmental commitment,” said facilities manager Paul Bayley.  “Addressing water usage was one of the initiatives that came out of a recent meeting, when we realised the old tank system was way beyond being efficient.”

Christeyns water and energy specialist Brett Cartwright analysed the current provision and needs of the College and a Lint X Compact was installed and up and running ready for the students return post lockdown.

The new unit is estimated to save the site around a third of its water usage which, over the course of a year, will represent a considerable saving and go a long way towards meeting the College’s sustainable targets.

Lint-X Compact comprises a pair of tanks for storing and filtering used water from the washing process, typically water from the press tanks and rinse water tanks of the CBW’s.

The unit operates between three to five pumps and a freshwater valve in order to supply several washing machines with filtered, but used water, thus reducing the freshwater consumption in a laundry.

Bayley commented: “Christeyns carried out a very professional installation of the Lint-X unit despite the challenges imposed due to lockdown.  The whole process went very smoothly and I look forward to seeing the longer-term impact on our water usage.”