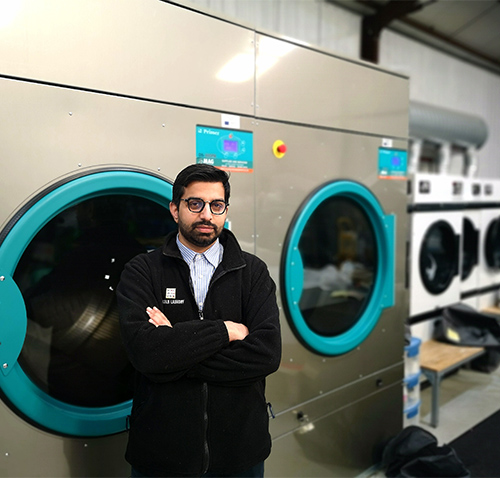 UK
A laundry operator tellingly points out that although the Government may say it understands the importance of the hospitality industry to the nation’s economy, it has very little grasp of the fact that hospitality relies on a chain of suppliers, notably laundries, to support it.

Lincoln Laundry, based in North Hykeham, Lincoln, is a family run business employing 15 people that provides high quality laundry services for a range of industries, including hotels, restaurants and catering, education and healthcare, as well as supplying workwear and a range of specialist services. Its experience of the Covid-19 pandemic is that of many commercial laundries, having been denied much of the financial support provided to other industries. “The Government says it understands the importance of the hospitality industry, but it’s leaving the businesses that support the industry to their own devices,” says Ahmed Hassan, director of Lincoln Laundry. “And the longer it goes on, the harder it gets.”

Lincoln Laundry is a member of the Textile Services Association (TSA), which has been increasingly concerned by the reports of its members at the lack of support they are entitled to.  With 24,000 people being employed by the industry, decisive action is required to save those jobs. The TSA has been lobbying the Government for more help alongside organisations such as UKHospitality.

Like many of the businesses that have come forward to provide evidence for the TSA’s argument, Lincoln Laundry is a victim of circumstance. “In early March 2020 we had just finished moving into new premises,” says Ahmed. “We needed the extra space to help continue growing the business, although there were expenses with preparing the building and buying new equipment, we were well positioned to have a good year.”

But when lockdown was introduced at the end of March, all their customers closed and business dried up. The move to new premises had put them just over the threshold for higher rates. While Lincoln Laundry has been able to access the furlough scheme to help pay staff, they have been left out of the other measures put in place to help the hospitality industry, like rate relief and grants. “The government hasn’t been looking at the big picture,” says Ahmed. “They’re responding to the loudest voices in the room, but they’re not providing any help to the sectors that support the businesses that are getting financial aid.”

The local authority has done what it can, but “their hands are being tied by the Government, with no room to consider cases like us.” With no rates relief, the business has had to go on a payment plan. “Our fixed costs don’t change whether we’re open or closed.  With 95% of our customers closed, we burned through our reserves just keeping things ticking over in the first lockdown,” says Ahmed. “No business can hold a full year’s income in reserve! Things looked up during the Eat Out to Help Out scheme in August, but slowed up immediately after.” When the second lockdown started in November, and the post-Christmas lockdown once again shutting its customers down, Lincoln Laundry has seen its income shrink to almost nothing.

“The lockdown has also meant a lot of our debtors aren’t able to repay what they already owe, and we’ve seen a few customers go bust already. It all adds to the pressure - we’ve had to put in considerable amounts of our personal savings.  It’s been enormously stressful but we’re doing everything we can to ensure we’ll be able to continue supporting our customers when they begin reopening, as well as saving the jobs of our staff,” says Ahmed. “They’re like family to us, some of them have worked here for years and the depth of experience they have is a huge part of our success. They would be impossible to replace.”

Commercial laundries have always played an important (if hidden) role in the hospitality and foodservice industries.  With the increased focus on hygiene and cleanliness, as a result of the measures required to control the spread of Covid-19, laundries will be vital for a smooth recovery when lockdown restrictions are able to be relaxed. “We know we’ve got a viable business once things start opening up,” says Ahmed. “But the longer we’re left to look after ourselves, the harder it’s going to be to survive.

“In Scotland and Wales a much higher percentage of laundries are getting help, but in England supply chain businesses like us are being abandoned. Central Government sets the rules, and the local authorities’ hands are tied. We did qualify for a small grant in November, but that barely made a dent in our costs, and barely even covered our rates for the month,” says Ahmed. “Even when we do reopen, our customers work on a 60-day cycle to pay their contractors, so it will take nearly two months before we get paid again.  Not having a sensible policy in place to support businesses like Lincoln Laundry is going to put the wider hospitality industry in a less stable place at a critical time.”

The TSA has been working with other trade associations to urge the Government to provide the same level of help to commercial laundries supplying the hospitality industry that other businesses in the sector have been receiving. This includes amending guidance given to local authorities on discretionary grants, allowing more commercial laundries to qualify for rates relief, deferment of VAT until payback is viable, extending the terms of government loans until laundries can afford to repay them, and making more loans available during the bounce back.

“At the end of the day, we’re just asking for fairer treatment. Many businesses in other industries have been getting huge grants while they haven’t even had to close, but companies like us, in the supply chain, have seen 95% of business stop for a year, and we’re getting short shrift,” says Ahmed. “The Government knows how important the hospitality and service industries will be to the future recovery of the country, but as it is they’re creating more problems by not supporting the supply chain that supports the industry.  If the supply chain goes under, the hospitality industry won’t be able to function.”