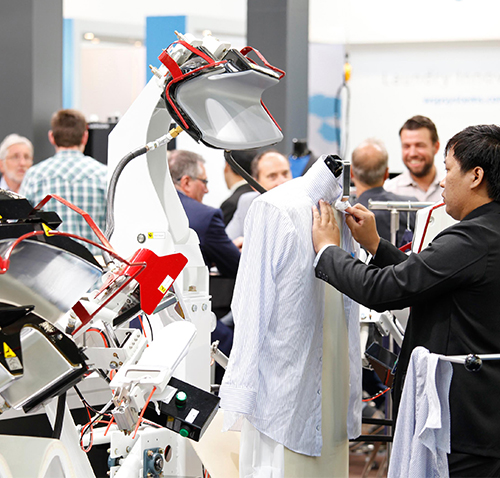 INTERNATIONAL
It seems we have been a long time waiting for the other shoe to drop on Texcare, writes Kathy Bowry, but in reality, it all happened rather quickly. It was only just over a month ago that LCNi published a positive interview by organisers Messe Frankfurt with Elena Lai of the European textile services association, ETSA*, on the advanced technologies to be showcased at the show in Frankfurt in November.

All was sweetness and light at that point but doubts about the viability of the show with the pandemic still raging globally, the continuing impact of the more transmissible Delta variant, people unwilling to travel internationally and the many restrictions curtailing travel, meant exhibitors began to question Texcare’s viability this year.

At the end of August, the first shoe thumped to the floor. Big draws to the show such as Jensen, Kannegiesser, Milnor among others, withdrew and were swiftly followed by a flood of exhibitors pulling out. Some, like Alliance and Ecolab, didn’t feel able to commit to the show after two previous postponements due to the pandemic and were not on the list for November at all.

A statement from Messe Frankfurt released late on 7 September (as LCNi went to press on the September issue) was the other shoe hitting the floor with an emphatic thud. It said: “Leading suppliers of laundry and drycleaning technology have used the free cancellation deadline offered by Messe Frankfurt against the background of the pandemic and cancelled their participation in Texcare International 2021 shortly before expiry. In view of this the Advisory Council of the world’s leading textile-care fair has voted to cancel Texcare International for this year because its success can no longer be guaranteed.

“In view of the corona virus crisis earlier this year, Messe Frankfurt offered exhibitors of Texcare International the right to cancel their participation free of charge until 3 September. As the months passed, the overall outlook became increasingly positive and, by the beginning of August, around 200 companies – including the important and big manufacturers from all parts of the textile-care sector – had registered to exhibit at Texcare International in Frankfurt am Main from 27 November to 1 December 2021.

“Factors contributing to this included the growing pace of vaccination around the world, the categorisation of trade fairs as business events and the officially approved protection and hygiene concept of Messe Frankfurt. Nevertheless, the mood changed shortly before the cancellation deadline as leading companies decided to withdraw from the event because of uncertainties regarding the future development of the pandemic.”

Kerstin Horaczek, vice president Technology Shows at Messe Frankfurt, took stock after the deadline: “Together with our partners, we worked untiringly to stage the Texcare International for the textile-care sector in the autumn. However, a leading international trade fair with a significantly reduced spectrum on show would not do justice to participants’ expectations of the fair as the most important meeting place and innovation hub for the sector. Therefore, we have decided to accept the vote of the Advisory Council and cancel Texcare International 2021. We are extremely sorry about this. At the same time, we are grateful for the on-going, high level of commitment demonstrated by the sector for their most important trade fair.”

Associated events planned to run alongside Texcare have also suffered. The World Textile Services Congress (WTSC) will not go ahead and LCNi is waiting to hear what plans there may be to hold it in the future. Cinet had three big launches planned, including its next GBAP 2022 awards program. These, however, will go ahead in digital form, as a hybrid event had been originally organised, so the online component will be live streamed.

Sadly, this year, the Texcare Frankfurt curtains will stay firmly drawn together in a darkened arena but. Messe Frankfurt stresses that it will continue to offer the textile care sector several events where they can do business in other important economic regions of the world.

Russian experts from the textile-care sector will meet at Texcare Forum Russia in Moscow on 15 September.

Texcare Asia & China Laundry Expo, Asia’s leading textile-care trade fair, will open its doors in Shanghai from 22 to 24 December, moving from its original September dates.
Next year, the Clean Show, the biggest trade fair for textile care on the American continent and also organised by Messe Frankfurt, will see the industry present its latest innovations and developments in Atlanta from 30 July to 2 August 2022.